Summary:  A gradual ascent into the alpine, circling the majestic Trapecio, is followed by a dramatic unveiling of the major southern faces of the range at a high point.  An easy, flat glacier crossing offers more breathtaking views.  The day ends with an interesting but straightforward slab descent and a hike along a moraine crest to what is perhaps the second best camp on the Alpine Circuit.

Ascent: Cross a rock wall and hike up the right (W) side of the valley rising to the S for 3km. Curl over a shoulder to enter a hanging valley to the W. A cliff band looms at the end of the valley. Follow either a grassy route on the left or a moraine crest route up the center of the valley to ascend through the cliff band. The trails converge above the cliff band in a beautiful hanging plateau.  Pass Trapecio Lakes (glorious campsites available) then follow a trail on scree up to the continental divide at Trapecio Pass (4910m; 3h from Huayhuash).  Do not descend the other side. Instead, turn right (S) and scramble uphill on redish rock, to a notch (5110m) with incredible views of Carnicero, Sarapo, and Siula Grande.
​
Descent:  As late as 2010, it was easy enough to walk through the notch, then making a scrambling descent to reach the Huayhuashjanca Glacier.  However, glacial recession has made this direct route steep and loose in recent years. A better approach is now to scramble down to a col due W, then walk down easy scree to step casually onto glacier. The glacier is flat, aerated ice, with no real crevasses.  Hike NW on the glacier and exit it after less than 1km.  Hike on scree, within 100m of the edge of the glacier. Pass over a shoulder notch, then begin a slab descent (1.5h from the high point).  Descend to the right (N) down easy friction slabs beside a steep, dark wall.  Once at the base of the wall, descend directly down easy friction slabs (many cairns), to a small, cairned bench around 4700m.  Traverse left (S) to exit the slabs into a grassy gully. Descend to cow pastures atop the moraine S of Jurau Lake. Follow a trail on the moraine until directly above the outflow of the lake then down to a pristine camp between Jurau Lake (4343m) and a tiny lake to its W.​ 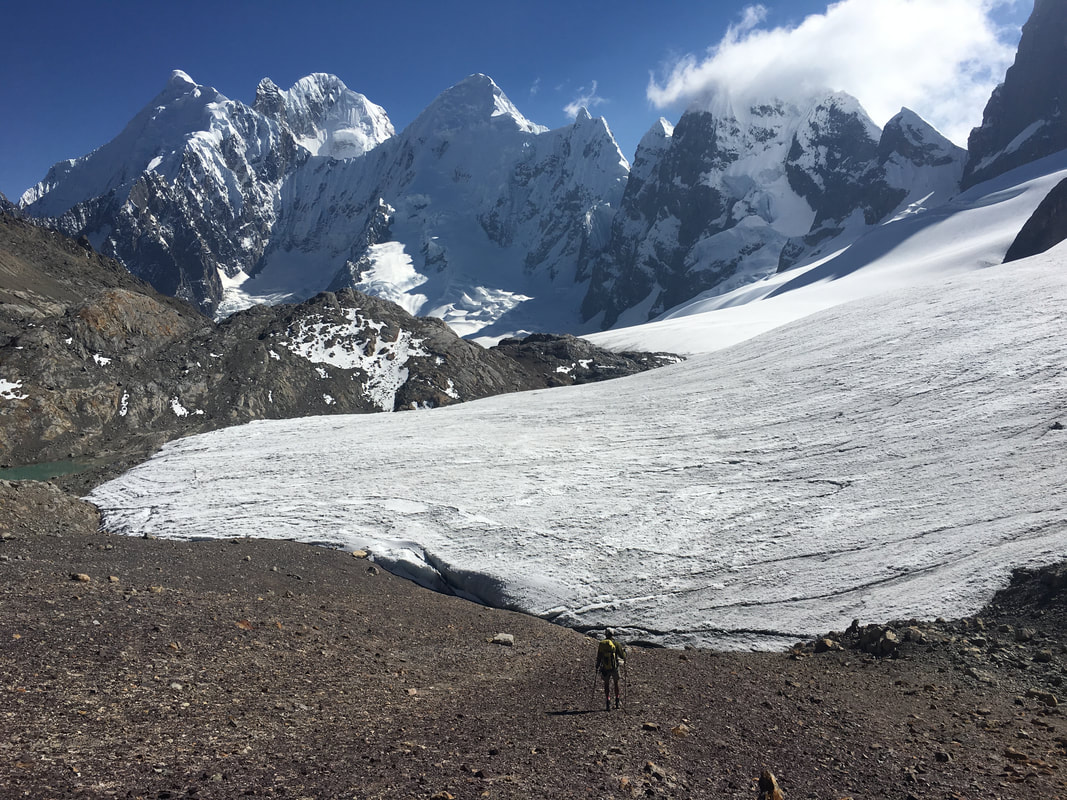 Descent to Jurauraju Glacier with Sarapo, Siula Grande, and Carnicero behind. 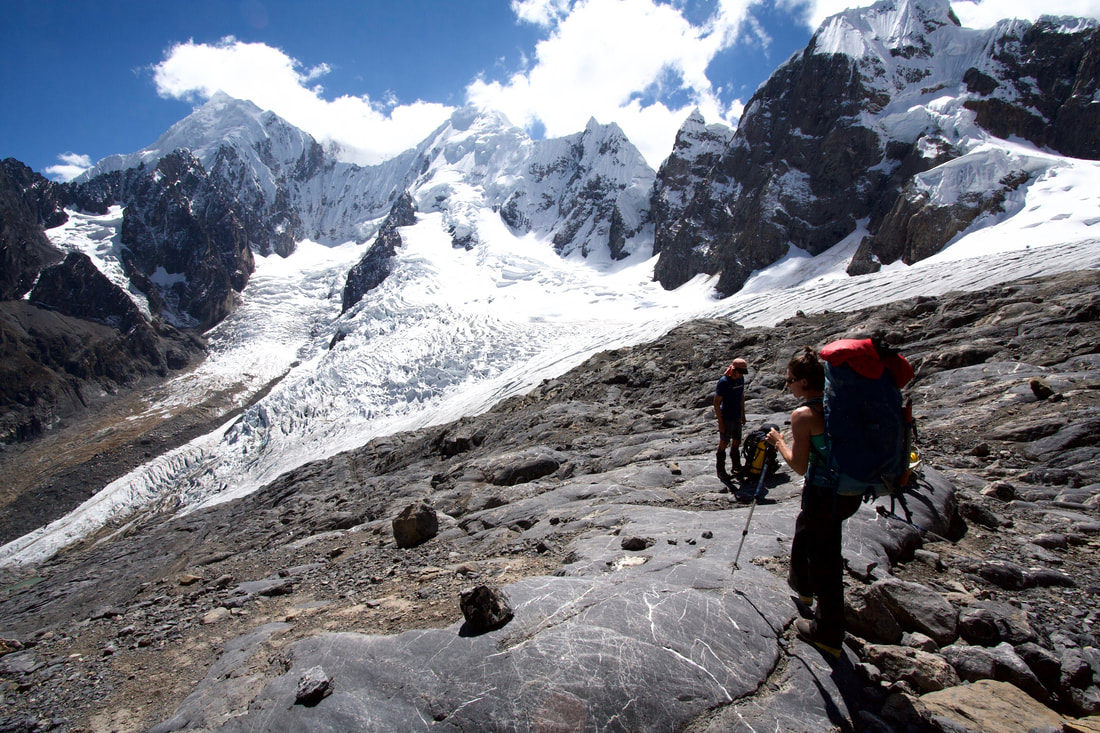 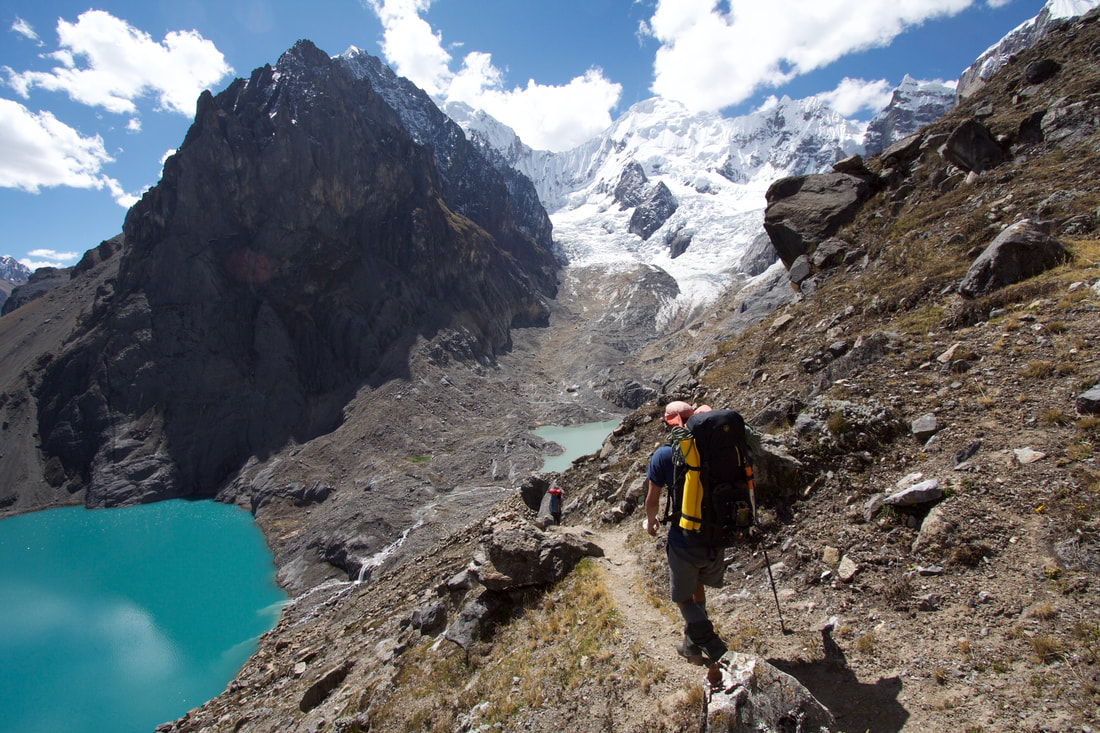 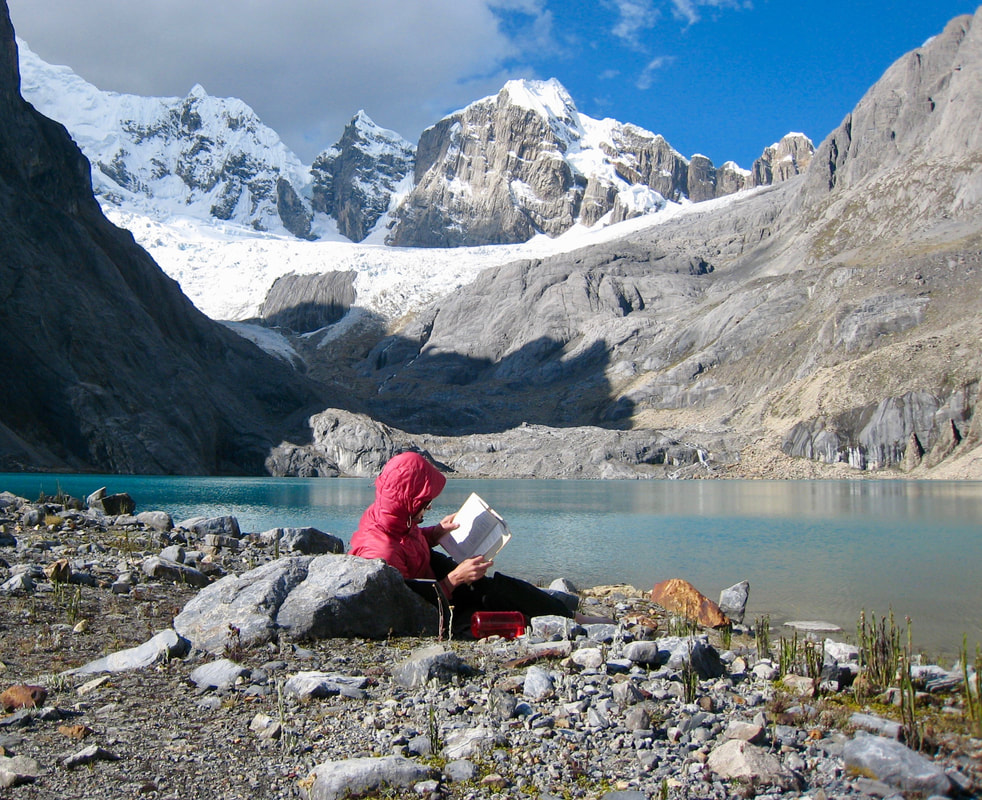