Summary: This day is intimidating, technical, exposed, and complex. High crosswinds at the col, potential ice and snow in any month, and low 5th class rock climbing up and down earn this day its reputation as the crux of the Alpine Circuit. Only strong parties with decent weather should attempt Garacocha Col. ​I recommend referring to the gpx track repeatedly on this day. To go around Garagocha Col, return to Rondoy, hike up (N) the road for 4km to Quartelhuain, then follow the Valley Circuit trail over Cacanampunta (4690m) to Mitucocha.

Ascent #1: An intimidating cliff band runs the entire length of the lake, blocking passage to the col. To get past the cliff band, backtrack north from camp for 100m to the shoulder you crossed the day before, then turn R (east) to gain a path heading uphill. The path ascends for 200m then traverses right (S) on a narrow bench above the cliff band (exposed and tricky at times). After 300m, reach slabs and benches. (It is possible to reach this point by walking along the lakeshore to the S end of the lake and then ascending steep grassy slope, which is hidden from camp.) Angle up and right toward the SE for 600m through ledges and slabs, then ascend slabs directly upwards (east) for 250m to reach the base of a steeper rock headwall at 4860m. Route finding here becomes critical. Turn left (N) and ascend a scree-covered ramp for 100m to reach the base of a distinct yellow basalt dyke beside a right-facing corner. The technical climbing begins here. The dyke is blocky, solid 5.0 rock climbing (with a light pack; harder with a heavy pack) for 25m, with the crux ~15m up. After passing a piton, an additional 15m of easy scree leads to Garagocha Col (4910m). 3h from camp to the col.

Descent #1: From the col, descend to the right (SE) for 30m down a sandy, narrow ledge to its end at a wall. There are two steep gullies/corners below. Carefully down climb to the buttress between the two corners to a solid block that can be slung. Descend the right (S) gully via an 8m ramp (5.0) to a ledge then down climb straight down for another 10m of 3rd class to a second ledge. This ends the technical climbing. Walk left (N) for 30m down a sandy ramp to reach the top of a large scree cone. Walk down the scree cone, past a bottleneck, to where the scree meets grassy slopes below. Turn left (NE) and aim for the base of a large cliff visible from here. This avoids a major invisible cliff band that runs the length of the slope below. Once past the cliff band, descend easy grass slopes to the south end of Mitucocha. 2h from the col to Mitucocha. There is an option to camp at the north end of Mitucocha (shared with the Valley Circuit; expect to pay a fee there).

Ascent #2:  Walk up grass slopes E of Mitucocha to reach a grassy bench.  Turn S and slog uphill toward a grassy break in a cliff band above. The grassy break has a trail up it, which leads to a ridge crest. Do not cross the ridge crest. Instead, turn right (S) and walk up the ridge crest to 4700m elevation then traverse the left (E) side of the ridge for 1km, staying high above the valley floor. A wet, slabby cliff blocks the end of the valley below and on the left. Avoid it by remaining high on the E flank on a trail that becomes well-worn and easy to follow. Once above the cliff band, descend to Alcaycocha Lake (4670m; optional camping).  From the S end of Alcaychocha, maintain your elevation, and side-hill toward the S.  Curl under two shoulders then turn SW and slog up loose talus to a small notch (3h from Mitucocha; 4780m) to catch a first glimpse of the stunning view of Jirishanca’s SE face.
﻿
﻿Descent #2:  Descend scree slopes to the creek that flows out of Chaclan Lake (4h from Mitucocha; 4487m). Camp here, which is among the best three campsites on the Alpine Circuit. 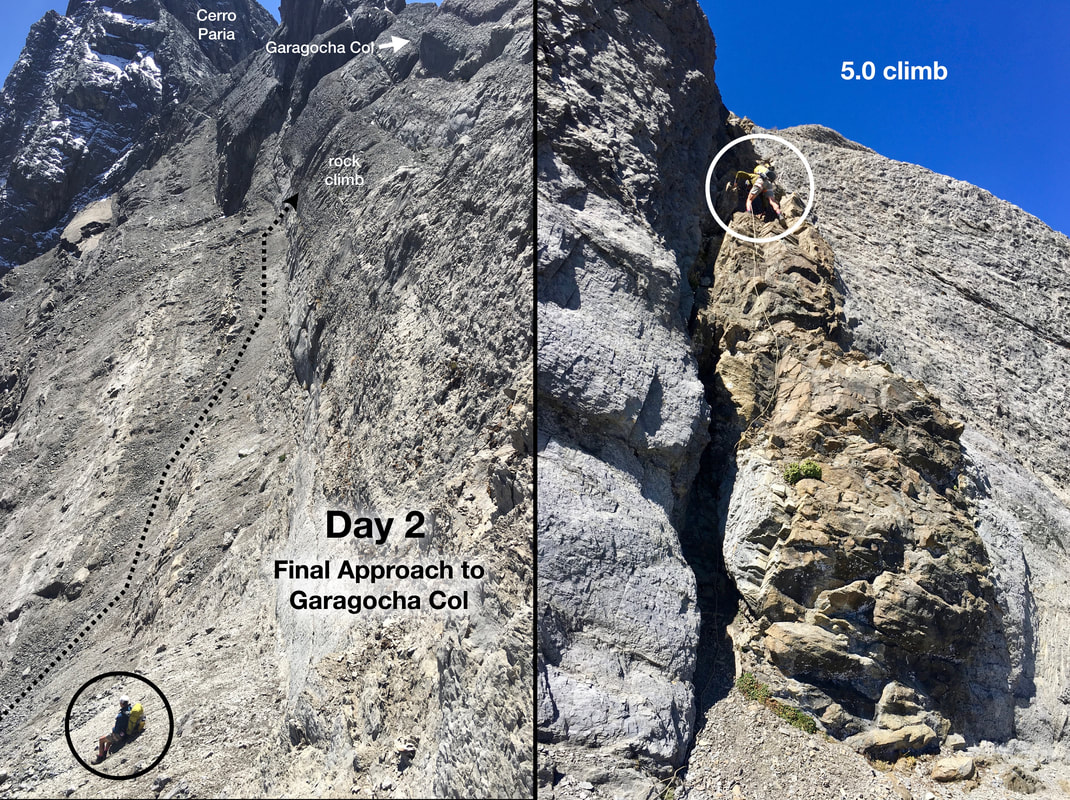 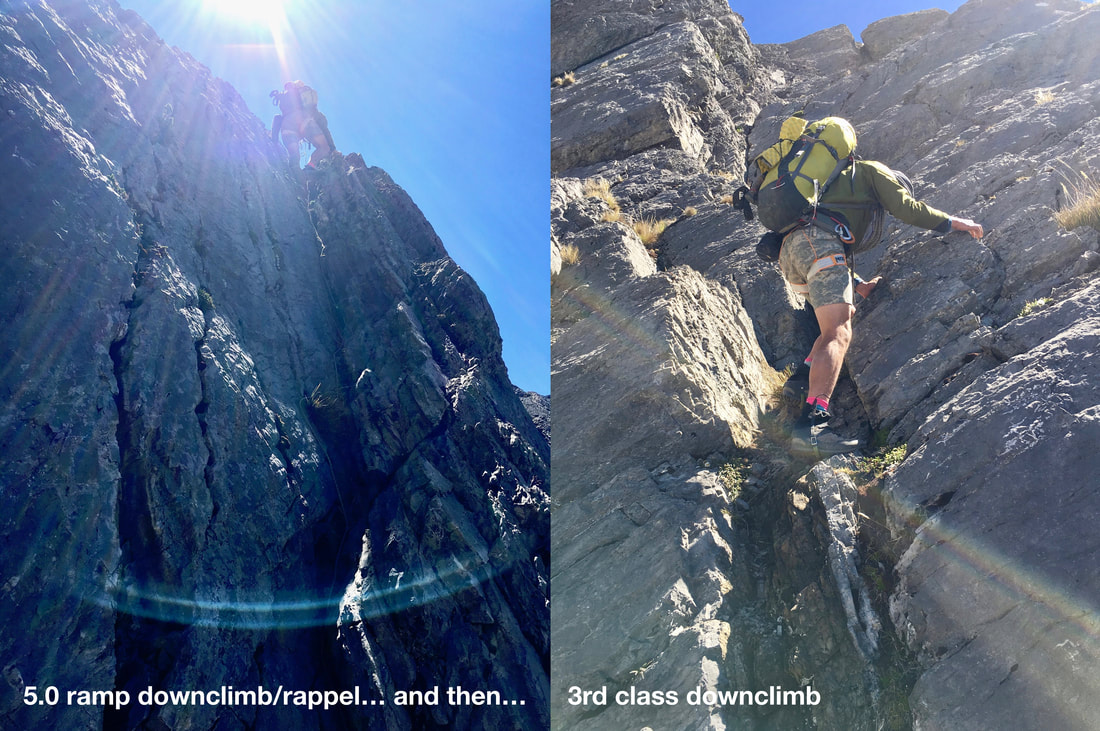 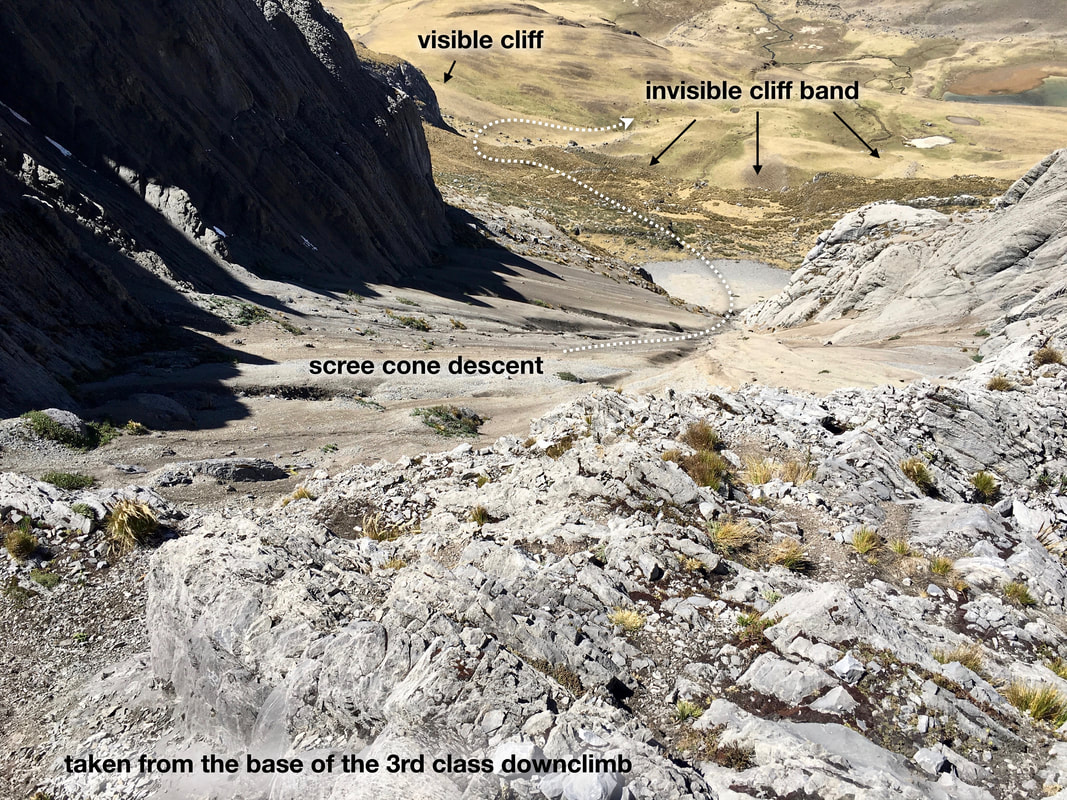 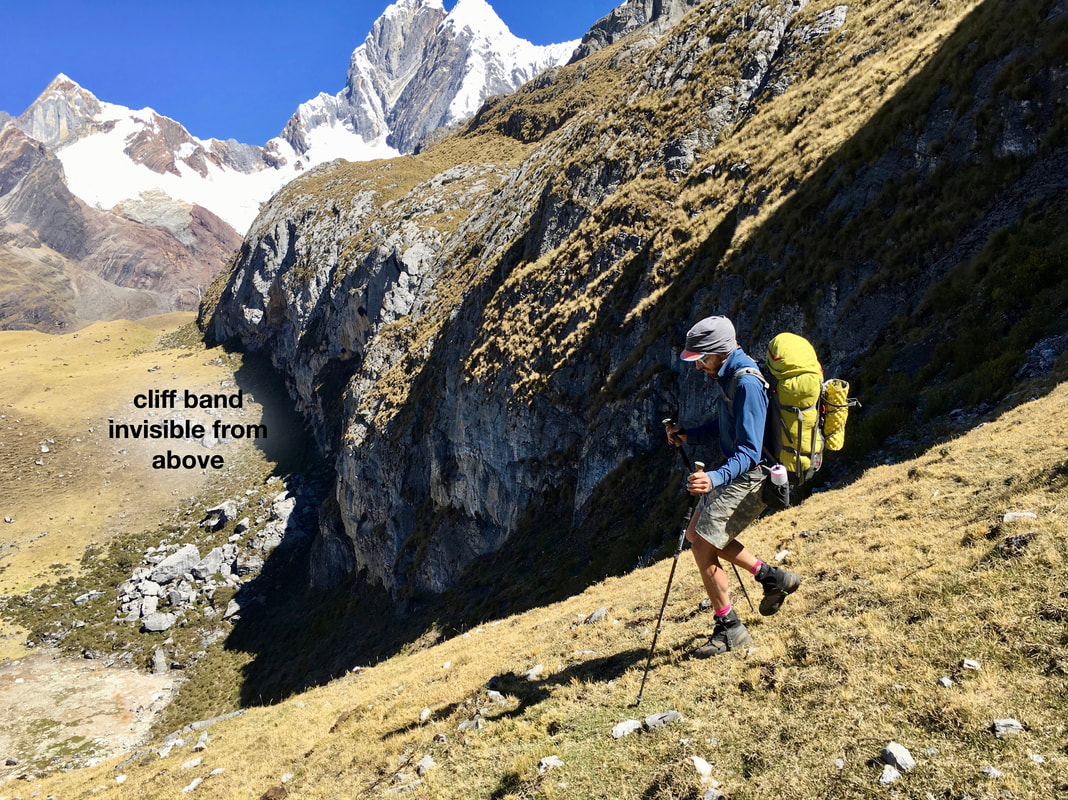 The magnificent pink of the evening began to illuminate mountains and corniced ridges all around; the sun, like a red orange, shone on endless mountain chains to the west and violet jade-coloured night crept up from the Amazon lowlands. Never had I been so affected by the beautiful and illimitable  Sierra as on this lonely evening walk along the corniced ridge of Ninashanca, the backbone of the continent.
​~Heinrich Klier, 1954